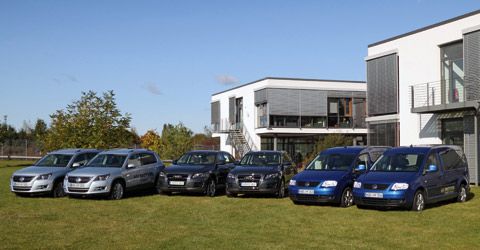 In an effort to further promote hydrogen-powered cars and, at the same time, to test them out under city traffic conditions, Volkswagen has just announced that it will be deploying six models running on hydrogen fuel cells on the streets of Berlin.
The vehicles, two VW Tiguan HyMotion, two VW Caddy Maxi HyMotion and two Audi Q5 HFC will be tested starting from the end of this month and reveal to people the benefits of hydrogen as a new fuel and to gain new insights into the new technology.

Prof. Juergen Leohold, head of research at Volkswagen revealed: “The fuel cell is an important component of the fuel and powertrain strategy, Volkswagen. We are pleased to put our fuel cell vehicles available to the CEP project. The first Volkswagen models with a sufficiently durable and affordable fuel-cell drive could there be, in our view, at 2020th parallel, but also the development of a complete hydrogen infrastructure. ”

For those of you who don’t know, Volkswagen is part of the Clean Energy Partnership (CEP) which is an international association of companies, much in the vein of the recently formed Hydrogen Alliance, that joins companies like BMW, Berlin Transportation Company (BVG), DaimlerChrysler, Ford, GM / Opel, Hydro AG, Linde and Shell Hydrogen, StatoillHydro, TOTAL or Vattenfall Europe.

This partnership focuses on a three-phased project, which will push the technical development of the systems behind hydrogen-powered vehicles. The first phase will be this testing around busy cities, the second one, which will last until the end of 2010 will allow for updates in the systems, infrastructure and testing that involved the vehicles and the last one, will prepare the market for the wide scale launch of hydrogen fuel cell cars.

In case you’re going to Berlin anytime soon, be on the lookout for these vehicles which just might pave the way for transportation as we know it.