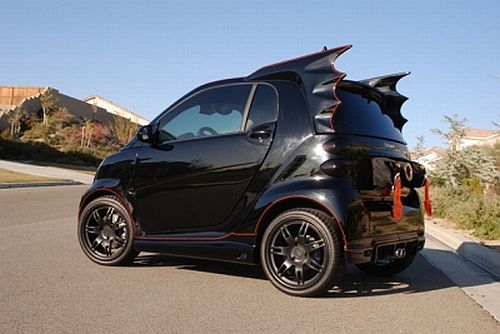 Ebay has always been an interesting source for finding realy weird and/or cool cars and this is definitely one of these cars. This special Smart called the “Bat Smart Car” was built by the guys over at Hurley Motorsport, was showcased at last year’s SEMA Show and is now for sale at a current bid of $8,600 (however, that’s below the seller’s reserve price, which means it won’t sell for that, but for more). If you’d like to place your bid, you’d better hurry, because the auction ends tomorrow.

So, what does this car have that makes it so special? Well, I think the pictures say everything there is to say about it. Developed with the help of George Harris, the creator of the original Batmobile, the BatSmart features an unique bodykit, batwings, crests, turbine and rocket launchers (of course, none of these is functional, they’re only there to look good). Also, we’ve got Lambo doors by Vertical Doors, custom black Bat paint with hot Bat orange pin stripping, panorama roof and the interior features custom Suede for the door panels and dashboard, custom Leather Diamond Bat seats and a custom Batmats 3-spoke learger sports steering wheel.

According to the eBay description, the car is currently owned by Phil Hurley and Hurley Motorsports won’t build another unit, so it’s one of a kind. Now I’m sure Batman would never ride in something like this (unless, of course, he’d be hit hard by the financial crisis and won’t afford the gas for his regular Batmobile) but you gotta admit, the car’s pretty funky.